Giveaways for Chicken Lovers! (No, Not for Dinner.) 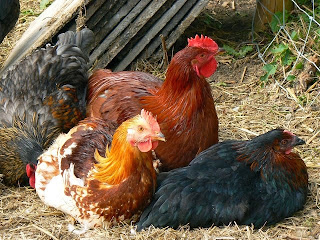 
Grand prize is a set of four 10" x 10" matted prints from the "Inspiration Chicken" Series by Sarah Hudock, retail value $92. These are really colorful, beautiful prints.

This is by Rafflecopter entry, for those who are familiar, so it is quite easy. Generally, for these types of entries, a small task is performed, such as leaving a comment, or liking a page on Facebook.

Prize ships to U.S. addresses only. As of this date, you have a week or so left to enter. There is a countdown clock on the widget to tell you exactly how much time is left.

Once you've entered, you will be re-directed to a page with several more giveaways, including more chicken coop giveaways!

One entry per email address. Ends April 22, 2014. Open to legal residents of the continental United States who are 18 or older.

Though horror and sci-fi fans might want to scream over this, who couldn't use an autographed rubber chicken?

12 grand prizes are being given away of one retired rubber chicken, each, autographed by Svengoolie (Rich Koz), the host of Me-TV's Saturday night horror movie show. Each chicken was used in a show. One prize is being given away each month. Prize is valued at $10.

You must sign up for the newsletter when you enter, if you want your chance to win a signed rubber chicken. The rules state that the newsletter goes out on the first Friday of each month, so you won't need to be afraid of getting too many emails. Once you've signed up, you will still need to re-enter monthly to qualify for each month's giveaway.

Open to legal residents of the contiguous 48 states, Hawaii and the District of Columbia who are 18 years of age or older. Ends December 31, 2014.