Two Sweepstakes with Cookware Prizes, and One Cook-Off! 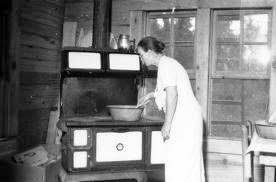 So, here are two sweepstakes to give you the chance to win some cookware, and a cook-off so you can share your hard-earned skills to possibly win some cash and more!


This is from Biltmore, as in the Biltmore Estate of Asheville, North Carolina.
So, the set is, yes, quite lovely, and made primarily from stainless steel so it will be durable, too.

(Oh, my! I think that Creme Brulee sounds luscious... but don't they all!)


This sweepstakes is by Facebook entry. It offers three grand prizes, each a useful addition to any kitchen, as follows:

And, of course, it's Farberware, so you know it's good.


Bonus entries awarded for friends who sign up through your assigned link, given once you've entered. Open to U.S. and Puerto Rico addresses, according to the rules, though the entry form says U.S. addresses only. Entrants must be 18 or older. Ends February 23, 2014.


This is a contest, so takes careful reading of the rules in order to keep from being disqualified. However, if you have the skills to make a good main dish recipe using Martha White® cornbread, cooked in Lodge® Cast Iron Cookware, it could be worth your while.

Of course, anybody worth their cornbread knows that there's no better way to cook it than in cast iron cookware ; )

This is the first phase of this contest, and it ends on February 28, 2014. Ten finalists will be chosen, based upon certain judging criteria, from this phase.

Finalists are then required to compete in the National Cornbread Cook-Off in South Pittsburg, Tennessee, on April 26, 2014, in order to qualify for prizes. This is at your own expense, and you must bring your own ingredients and kitchen equipment, excluding a stove. Competitors will still receive a $500 reimbursement to help cover these expenses.

Winners of the cook-off phase will be awarded prizes as follows:

Enter as often as you wish, but only one entry can qualify as a finalist. Individuals only, no groups or teams are allowed to compete. Open to U.S. Residents 18 or older, except food professionals, and who have not been finalists or winners in a sponsor contest in the previous 12 months (a cook-off for Pillsbury, for example).

If you're new to Sweepstaking Dreams, be sure to check out previous posts, as many of the sweeps are still open!