Your Cabin Holiday Photos Could Win! 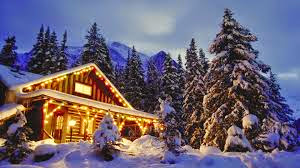 If you enjoy your holidays at the cabin, then Cabin Life Magazine would like to see some of your best holiday pics!

The theme for this contest is "Holidays at the Cabin." No technical specifications are posted in the rules (size, format, etc.), so basically, it appears that if you can upload it, you can enter it into the contest. Of course, it still must be relevant to the theme, and be tasteful.

Submissions will be judged based upon the following criteria: interpretation of theme, quality, composition, and relevancy to cabin living.

Once the submissions are closed, the magazine's editors will choose the top ten finalists, which the general public will then vote on to determine the winner (in conjunction with editorial review), beginning December 15. The last day to vote is December 28.


You may submit up to two photos. Open to residents of the U.S. and Canada (excluding Quebec), who are at least 18 and the age of majority in their place of residence. Ends December 14, 2014.


If you'd like to try to get featured in the Macon Telegraph... Submissions and voting open through December 14.
Holiday Lights Contest


On Friday I was an instant winner in the "The XC90 Experience in Volvo Reality Promotion," featured in the November 21st post, It's an Instant Wins Weekend!

Though certain things may seem inexplicable (at least to my youngest son), I had really, really wanted to win one of these, so I was quite excited when I did!

Right away, I searched for apps, and found the one from Volvo (with very good reviews) along with two others I could use, so I downloaded all three. Of course, I won't open them until the cardboard arrives, and is assembled and ready to use... The suspense will just kill me till then.

Thank you, Volvo, for this fun and exciting win!