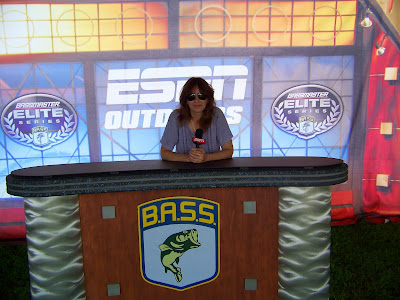 In 2009, Bassmasters Elite held a tournament in the local area, here on the Mississippi River. I had the opportunity to get a number of shots (with my camera) of the participants in their boats out on the river, as well as to go to the weigh-in ceremony for even more. In the end, I was also fortunate enough to get an interview with the winner, Kevin Short.

This article was previously published on the Yahoo! Contributor Network, however, with them recently closing the doors (as did Helium.com), it seemed appropriate to post this here, now.

To thralls of avid fans, the Bassmasters Tournaments are the ultimate in angling competitions (though some would still call it fishing). Many an angler dreams of the day he or she will participate, and take home that big win!

Many thanks, again, to Kevin Short, and to Bassmasters Elite. 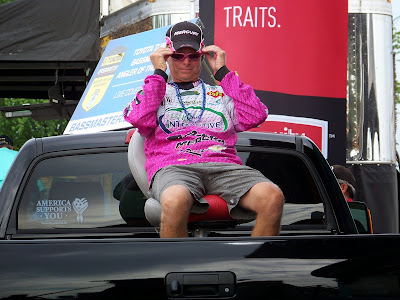 Bassmaster Elite Series professional angler Kevin Short has recently made his most victorious catch to date with taking the trophy at Fort Madison, Iowa in the Genuity River Rumble, broadcast on ESPN earlier this year. With six years of professional angling under his belt, it took a lot of fishing expertise and talent (and 43lbs. 3oz. of bass), to bag that big one.

Kevin affably agreed to share some of what his professional angling experience has taught him, his favorite way to cook fish, and his goals for the 2010 season in this interview.

Jennifer: What do you find to be the key to successful professional angling?

Kevin: There are more factors that go into being a successful angler than meets the eye. The deeper I got into the sport, the more I realized that “luck” plays very little in the outcome of many tournaments and in many pros careers in the long run. Sure, there are times when the ball just bounces your way, but over the course of several years, those bounces may not add up to a lot of money. The major keys for me have been a blend of marketing savvy, support from my wife, Kerry, and spending countless hours on the water.

Jennifer: If you were stranded on an island and could only take three critical pieces of fishing equipment, what would your choices be?

Kevin: I would have to have a 7 foot, medium action St. Croix spinning rod, an Ardent spinning reel spooled with 8 pound Vicious Fluorocarbon, and a silver CC spoon. I feel like I could take those three items around the world and catch something everywhere I stopped.

Jennifer: What is your favorite way to cook bass?

Kevin: We don’t actually eat the bass that we catch. Honestly couldn’t tell you the last time I’ve eaten a bass. Never have been real fond of the way they taste. Crappie, bluegill, walleye, redfish, or snapper are all on the menu, though. It’s a toss-up on fried for the smaller panfish or grilled with a little Tony Cachere’s sprinkled on for the bigger redfish or snapper.

Jennifer: What can we look forward to seeing from you in the 2010 season?

Kevin: In 2010, I want to continue the success I had in 2009 and work to even out and elevate my performance level. One of the hardest things to do on the Elite Series Trail is be consistent throughout the season and across the schedule. We visit so many varied fisheries over the course of the year and the guys who catch them every week are those who wind up at the top of the standings at the end of the year. I want to be one of “those guys” in 2010.

Best wishes to Kevin on achieving his goals, and in making 2010 a great season. 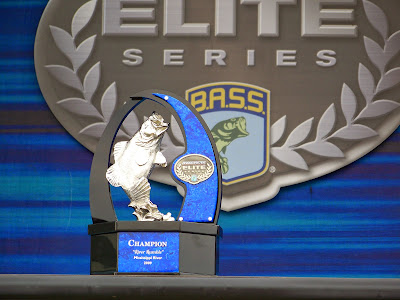 A Great Day Fishing... Keychain by IamJenny
Check out other Fishing Keychains at zazzle.com
Good Luck!

Posted by Jennifer L. Thompson at 8:30 AM