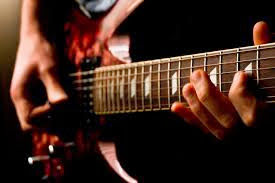 Today's sweeps are geared for those starving artists we all know and love. You know, the one who would pass up breakfast, after staying up all night working up a new tune, just to go to bed on time. Then, it's up at three in the afternoon to raid the frig, pump up on some caffeine, and start all over again...

Of course, who wouldn't want to win these?

This sweepstakes offers different rules for different locales - U.S., Canada, or Europe. For the U.S., sweepstakes is open to legal U.S.residents 18 or older, or the age of majority at their location, whichever is greater.

I found no indication of how many entries are allowed, though it is very clear that each entrant must use an email address that specifically belongs to the entrant, and must be able to prove that it does. Apparently, someone is used to people fighting over whose prize the winning entry actually is.

These things in mind, I'm guessing one entry for this prize. According to this press release, Epiphone is hosting a monthly sweepstakes, each month until September 30, 2014. Hence, I'd think one entry per month, for the duration, is a safe bet. Of course, as always, it's your entry, so do what you will : )


Win A Vip trip for 2 to See Metallica live at the Sonisphere Festival in the U.K

This one will have Metallica fans drooling...

Grand prize includes all of the following:

One trip for two to Knebworth, England. Trip includes two tickets to see the Sonisphere Festival, including Metallica live in concert at Knebworth Park, England on July 4-6, 2014, and to have a meet and greet with Metallica. Trip includes coach airfare, hotel for five days/four nights, local transportation to the Concert, and $200 spending cash. ARV of trip is $4,200.

One Deluxe Edition of “ Metallica Through the Never” 3D Blu-Ray Set. ARV $100.

One entry per person. Open to legal residents of the 48 contiguous United States and D.C., 18 or older, who have the proper travel documents necessary for international travel, all at the time of entry. Ends February 28, 2014.


Grand prize is just what is stated above, as far as I can tell. The rules hold no prize description, as it seems to be generic rules they might likely use across the board, so no ARV is stated. They do, however, redirect you to a page that lists the guitar's MSRP as $209, currently on sale. The pic the sweeps offers shows that the guitar is signed by the band members. This being said, it is sometimes difficult to ascertain how much the signatures would add to a prize value. Good prize, in any event!

One entry per person. Open to legal residents of the U.S. and Canada, 18 or older with a valid ID. Void where prohibited. Ends February 28, 2014.


In the end, it seems musicians are perhaps not very good at making rules... but they sure do make a lot of fabulous music : )